Blocks: Back in the Spotlight Again!

As I load up my trunk with containers of blocks and found materials in preparation for yet another training for early childhood teachers, I tell myself that I am getting too old for all this schlepping. Just as quickly as the thought crosses my mind, a surge of excitement and energy pulses through me. After six years of facilitating professional development sessions on the exploration of materials with teachers, I am more convinced than ever that blocks are one of the most essential materials for the early childhood classroom.

“Why then, in the name of school readiness, is block play marginalized, if not disappearing from children’s classrooms?” asks Margie Carter in the foreword to Creative Block Play (Hansel 2017). Increasingly, young children today are sitting in front of two-dimensional screens and worksheets instead of having playful, hands-on, sensory experiences with three-dimensional objects (Hansel 2015). Why is this a problem and what is it about blocks, and wooden unit blocks in particular, that make them such an important material for young children?

Many early childhood experts, including Friedrich Froebel, Caroline Pratt, Harriet Johnson, Elizabeth Hirsch, and Mary Jo Pollman, have documented the value of blocks for children’s learning, offering evidence that when children are given time to plan, construct, and create with blocks, they develop socially, emotionally, cognitively, and physically (Hansel 2017, 5). This evidence is now being confirmed by scientists using new technologies to see the inner workings of the brain.

According to Dr. Jo Boaler, a professor of mathematics education at Stanford University, brain research now shows that as you learn something deeply, the synaptic activity in the brain will create lasting connections (unlike when you learn something in a superficial way) and that “synapses fire when we have conversations, play games, or build with toys” (Boaler 2016, 1). In other words, building with blocks to experience their three-dimensional properties will create a lasting pathway in the brain and a deeper understanding of shape, whereas identifying three dimensional shapes on a workbook page is unlikely to build understanding of shape and three-dimensionality.

The Importance of Spatial Skills

In addition, there is exciting new evidence linking good spatial skills and children’s future achievement in all the STEM (Science, Technology, Engineering and Mathematics) subjects (Lubinski 2013; Newcombe 2010). “Despite the evidence, however, the importance of spatial skills is often overlooked as a key feature of STEM education. This frequent neglect of spatial development creates an additional barrier to children’s STEM learning” (Berkowicz and Myers 2017) and reminds those of us in early childhood education that we must start paying attention to developing spatial skills. While laying the foundation in the STEM subjects is important, especially for underserved populations and those underrepresented in the STEM fields, including girls, spatial skills are critical in many other fields, as well as in everyday life, such as when we load up a trunk with blocks and navigate our way to a new location for the first time.

The great news is that spatial skills can be improved with practice. While not all experts agree on a common definition of what spatial skills are (Hansel 2017, 20), most agree that the use of manipulatives helps children make sense of abstract concepts. Wooden unit blocks are a perfect example of a child-friendly manipulative that can be used to strengthen spatial skills. Think about how a child recreates a zoo with blocks while closely referring to a map of the zoo and carefully ensuring that each zoo animal fits into the enclosures she has made to scale.

Isn’t it time to put blocks back in the spotlight again?

Start with giving children ample time for open-ended exploration with blocks, but don’t stop there. If you really want to see children’s spatial thinking flourish, target the spatial skills in the table below and offer block activities that encourage spatial language and challenging tasks! Now the spotlight is on you!

Family nights are one night a week that is specifically for fun family time together. So much of our time is spent on things that we have to get done each day, and many times the evenings are not much different as they are a time for things like dinner, swim lessons, bath time and getting ready for the next day. Below are a few ideas to get you started on creating your own family night. Once you start the family night routine, it can be something that the whole family looks forward to each week. Make family night a “no distractions zone.” Turn off cellphones, computers and iPads to focus on having fun together. These nights help bond the family together and build happy, lasting memories.

Some families have each family night be a pizza and movie night or a popcorn and movie night. If you would like to extend the activity a bit have each person make their own mini pizza for dinner and then watch a movie together.

Family art night can really bring out everyone’s creativity. No need to plan a detailed craft to do each time, simply gather up a lot of art supplies, play some music, gather around the kitchen table and create. By keeping this more open-ended everyone is able to create art in whatever way they wish, using whatever art supplies they feel most comfortable.

How about a reading night? Pop some popcorn, grab a couple of cozy blankets and read out loud to your children. Even older children can enjoy this time together. Choose a chapter book and return to it week after week to see what happens in the story, or read through a whole stack of picture books, depending on the ages of your children. In addition to family time, keep in mind that reading aloud to children of all ages improves their language, critical thinking and literacy skills. 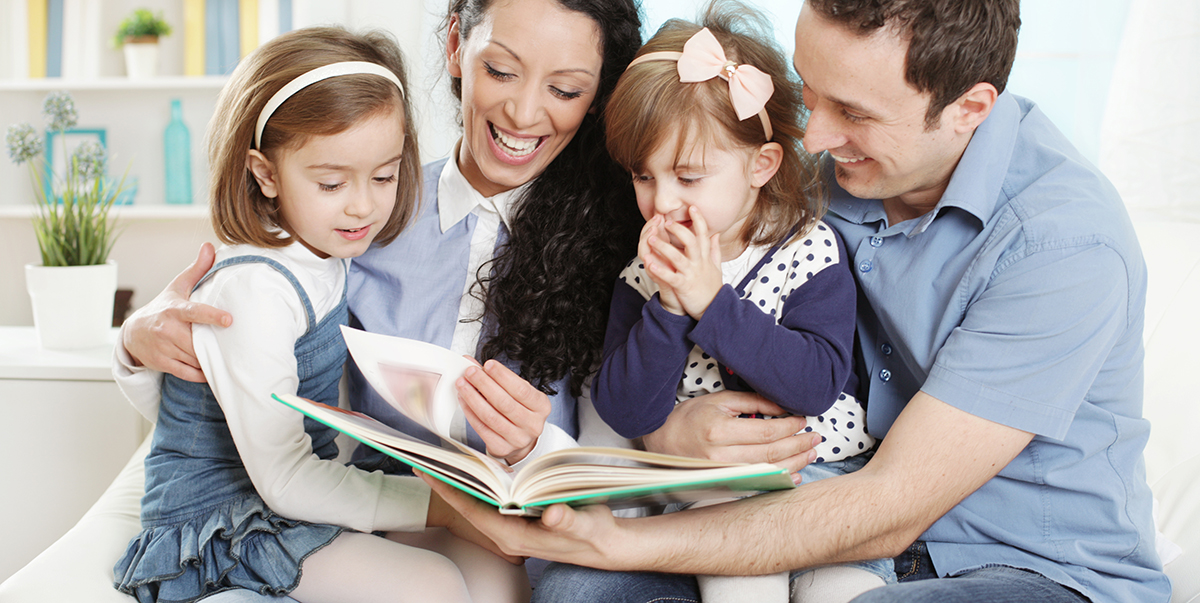 Have a living room dance party. Push the furniture aside and start the music. Take turns being the deejay and requesting music, even some of mom and dad’s music too. The great thing about this family night idea is that it also uses up a lot of energy. As the night goes on and bedtime approaches, change to some slower music to help ease the little ones into nighttime.

Pull out the baby pictures and home videos. Gather the family around and have fun looking at old photos. The whole family will giggle and reminisce about how they have changed since they were babies and toddlers.

Family game night can be a great way to spend time together. Get out some current favorites or some games that haven’t been played in a really long time and let the fun begin.

Have a building night. If your kids are really into Legos, work together to build a Lego city or Lego zoo. Not into Legos? Stop by a grocery store earlier in the week and ask for some empty cardboard boxes to build with. Kids can even decorate the boxes if they want to. Another building option would be to get some sheets or light blankets and some clothespins to build a fort right in the middle of the living room.

Family nights are a time to relax, have fun and just enjoy spending time together. Keep it simple and let the good times roll.

Do you want to create a community atmosphere in your center or family child care program? Have you wondered about how to get parents more involved in their child’s learning? The following information will provide you with many ideas on how to do just that. 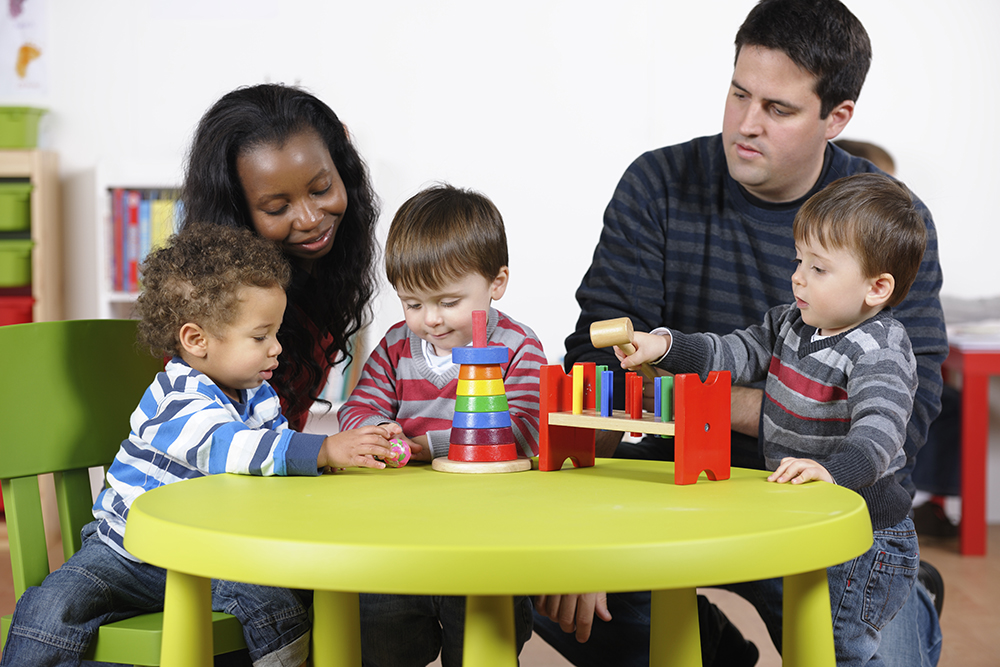 Involve families in two-way communication. Allow for both center and family initiated communication that is timely and continuous. Your communication should take multiple forms and reflects each family’s language preference. Examples include, but aren’t limited to:

Engage families in ways that are truly reciprocal. Centers and families both benefit from shared resources and information. How can you do that? 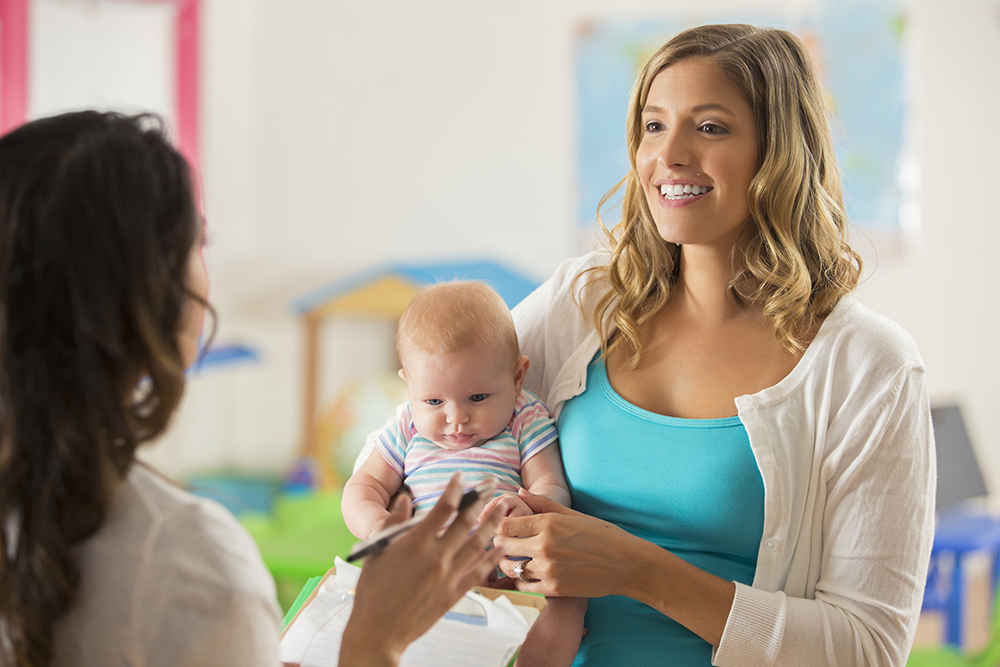 Plan trainings on topics that parents may be interested in:

Invite families to participate in program-level decisions. Ask for parent volunteers to head up activities and provide ongoing and meaningful input about programming.

Use some of these suggestions to give children the opportunity to see that the adults in their life want to work together.

At the end of the day, the most overwhelming key to a child’s success is the positive involvement of parents. ~Jane D. Hull

Supporting Children in the Back-to-School Transition

As summer winds down and the start of the new school year approaches, it is important to consider new rhythms and routines that promote predictable, smooth, and healthy transitions for the whole family.

Children crave boundaries and routines that are predictable and easy; this is especially important as schedules fill up with back-to-school activities. When children know what to expect each day, they feel safe and cared for.

Getting out the door in time to catch a bus or get to work on time can be challenging after summer days that may have been less regimented. If mornings feel hectic, consider visual cues for your children so they can work to keep themselves on task while you keep the ship afloat. A check list posted on the front door can be used to remind your kiddo about what they should have before walking out the door each day. Find some great suggestions for the morning transition, including printable morning checklists, here: https://carriethishome.com/2016/08/the-secret-to-getting-the-kids-ready-without-nagging/

Taking some time each week to plan meals can be a great way to save time during busy school and work days. Being intentional about planning meals can often lend to both healthier eating and financial habits. A simple notebook can do the job, but if you want something specific to lay out your meal plans each week, there are tons of great and inexpensive methods available, in paper or digital form. Check out this link for some suggestions for meal planning apps: https://www.realsimple.com/food-recipes/cooking-tips-techniques/preparation/meal-planning-apps

A good solid bedtime routine can certainly help to reduce struggles related to the return to the school year schedule. Bedtime rituals like reading together, snuggling and quiet talks about the day can be a wonderful time to slow down and connect with your child after busy school days. Additionally, ensuring that young children receive adequate amounts of sleep is important when considering rapidly developing brains and better prepared bodies for learning each day. Young children often need more sleep than we might think.

Preparing for the Transitions

Conversations about the upcoming changes to routines and schedules can be really helpful for children. Making time to talk about what each day might look like as your kiddos head back to school can be a comfort and offer some foresight. You might have a period of adjustment that feels difficult, but thankfully nothing is permanent.